PM Stoltenberg and 1,676 NO Gov. Officials Notified that Breivik Acquittal is Justified by Media's Population-Terrorism Connection

PM Stoltenberg and 1,676 NO Gov. Officials Notified that Breivik Acquittal is Justified by Media's Population-Terrorism Connection 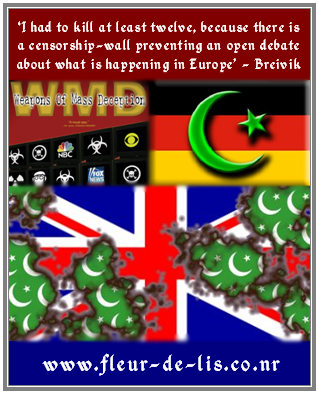 2. If Breivik proves his Political Necessity arguments -- i.e. 'Breivik brutally killed 77 to save 770 million from impending Islamic colonisation, massively censored from public discourse by media' -- should he be acquitted?

3. In the absence of a media censorship campaign, Breivik would have raised his complaints non-violently. What has been the media and Oslo Court's response to non-violent applications on behalf of Breivik receiving a free and fair trial?

Oslo Organized Crime Police Investigation Report "Explanation of 22 July 2011": "[Breivik] has been censored for years. He mentions Dagbladet and Aftenposten as those who among other things have censored him..... He says that he also wrote “essays” that he tried to publish via the usual channels, but that they were all censored..... As long as more than twelve were executed, the operation will still be a success. The experts ask how the number twelve comes into consideration. Twelve dead are needed to penetrate the censorship wall, he explains..... The goal was to execute as many as possible. At least 30. It was horrible, but the number had to be assessed based on the global censorship limit...... He believes he had to kill at least twelve, because there is a censorship-wall preventing an open debate about what is happening in the country..... So I knew I had to cross a certain threshold to exceed the censorship-wall of the international media."

The court has acknowledged receipt but not yet issued a case number.